Including a Removable Drive in a Library in Windows 8

I recorded a short video demonstrating how to include a removable drive in a library, in Windows 8 and Windows 7.  I didn’t discover this on my own, of course, but since I think it’s a useful thing to do, I wanted to show how with a video.

Including a Removable Drive in a Windows 8 Library from Osborne Supremacy on Vimeo.

This is useful for Windows RT devices, which usually have limited internal storage.  I have a 32 GB Microsoft Surface, and most of that space is not usable.  I did get a 64GB SDXC card for it.  Since that’s the biggest card it can use, I don’t plan on removing it, ever.  Also, since I want pictures, videos, and music I create or download to be stored on that card by default rather than the smaller internal drive, I wanted the card to be included in my libraries.

On a side note, I’m not sure why Microsoft doesn’t want you to include a USB stick or an SD card in a library, but doesn’t have a problem with you including an external hard drive that’s connected via USB or eSata.

So what happens when you remove the drive after it’s been added to a library?  Probably an instant blue screen with a KERNEL_STACK_INPAGE_ERROR, right?  Actually, just a simple “This folder is not available” message when you browse to it. 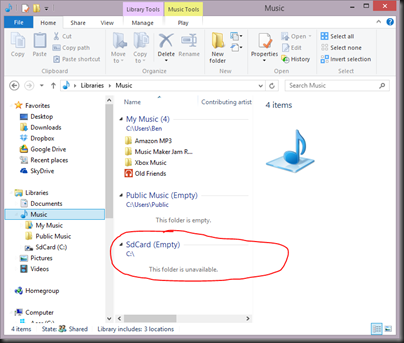